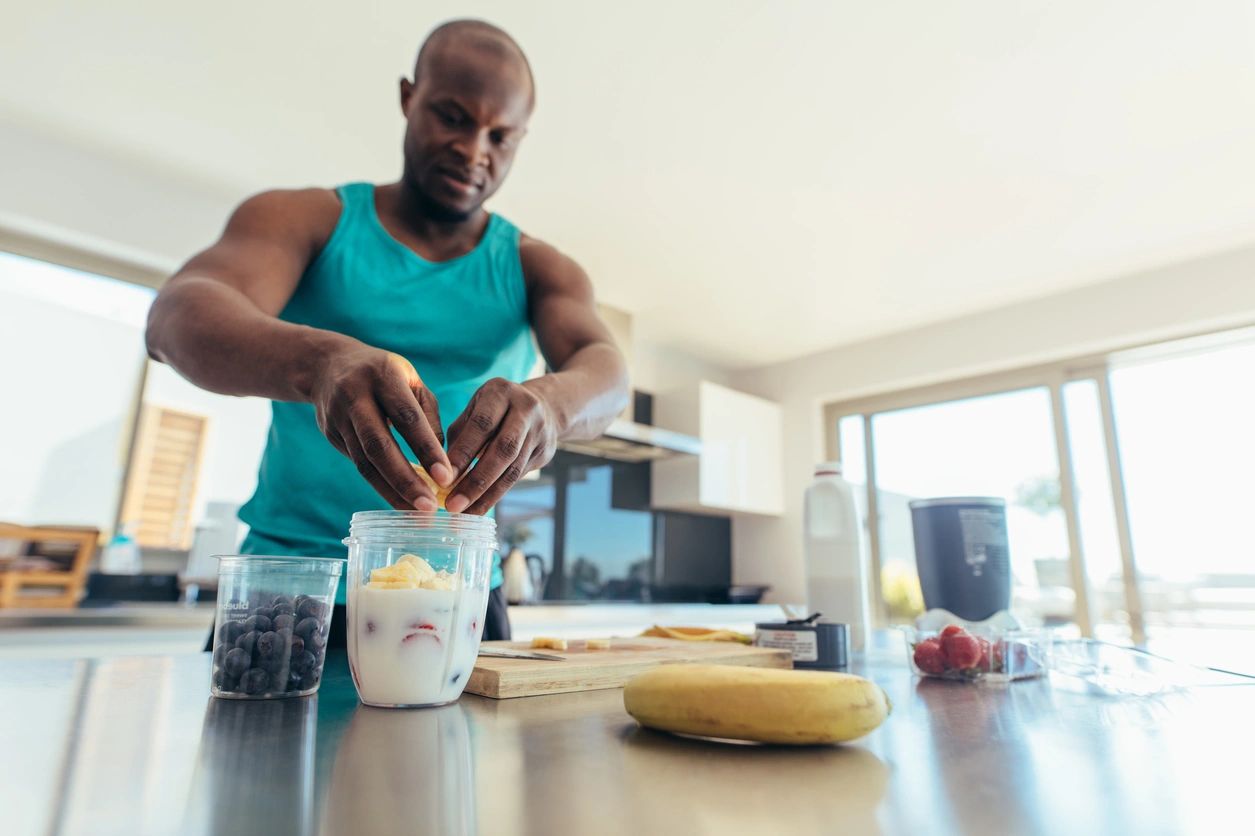 NOTE: We will use the terms “carbohydrate” “glucose” and “sugar” interchangeably in this post, for simplicity’s sake, even though not all carbs are the same!

When you eat carbohydrates, they are broken down in your digestive system into sugar molecules. These molecules circulate in your bloodstream and move in and out of your body’s cells as needed. When sugar (glucose) isn’t rapidly being converted into ATP molecules to facilitate muscle contractions–as we described in this post–it gets stored in the body for future use.

We have hundreds of grams of stored glucose in our body at any given time. The stored form of glucose is called glycogen, and it is mostly stored in the liver and in muscle cells. As muscles repeatedly contract and relax during endurance activities, circulating blood sugar levels drop, requiring our bodies to call on that stored form of fuel.  The body quickly pulls glycogen out of its storage locations, converts it back into sugar, and then into ATP. 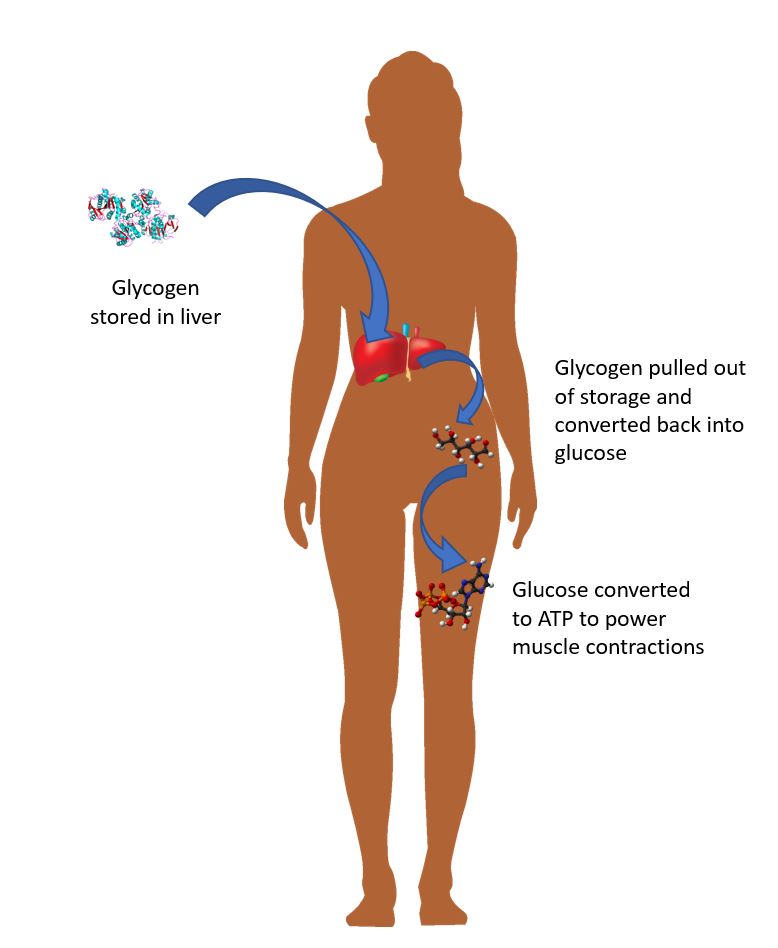 The dreaded experience of “bonking” or “hitting the wall” happens when fast-burning glucose runs too low–even after pulling from glycogen stores–and our body labors to switch over to fat-burning for continued ATP production. (There is a whole theory about training your body to preferentially burn fat instead of glucose–but that’s too much to take on in this post.)

So how do you ensure you will have plenty of glycogen stored up to fuel your endurance endeavors? It starts with taking in sufficient amounts of carbohydrates.

As described in a joint position paper by the American Dietetic Association, Dietitians of Canada and the American College of Sports Medicine, athletes should take in anywhere between 3 grams per kilogram per day and 12 grams per kilogram per day of carbohydrates. This is a HUGE RANGE! To demonstrate how big of a difference 3g/kg/day compared to 12g/kg/day is, consider a 145 pound athlete: At 3g/kg/day, their daily carbohydrate intake would be 197 grams. At 12g/kg/day, their daily intake would be 870 grams! So how do you know which end of that wide range applies to you?

It depends on your level of activity.

If you tend to engage in low intensity, “skills-based” activities most days of the week your carbohydrate needs would likely be sufficiently met by consuming carbohydrates in the 3g/kg/day range.

If your activity level is on the far other end of the spectrum, such as participating in high intensity activities for upwards of 4-5 hours per day, your carbohydrate needs could be as high as 12g/kg/day. And those are just estimates. Every person’s needs are unique to themselves and are also based on things like baseline metabolic rates, timing within annual macro training cycles and, I suspect, genetics.

(HINT: A registered dietitian that specializes in working with endurance athletes is an invaluable partner in determining this!)

By the way, go here if you need help converting your body weight from pounds to kilograms! Or, use the formula: body weight in pounds divided by 2.2.

So what does it look like to get in that amount of baseline carbs? Here’s a sample daily menu that just scrapes the bottom range of what we’re talking about:

Unfortunately, a large portion of athletes do not consume enough carbohydrates to adequately fuel their level of activity. This article published in Nutrition Reviews is a nice supplement to the position paper mentioned above, and also discusses carbohydrate needs for endurance athletes.

Despite chronically under-consuming carbs on a regular basis, many endurance athletes do pay special attention to carbohydrate intake in the days leading up to a competitive event. Engaging in “carb loading” may take place in the 24-48 hours prior to a race, and typically consists of eating disproportionately large amounts of pasta, potatoes, rice and other grains. What is commonly misunderstood is that this type of intensive carb loading is really only applicable for athletes participating in races that last longer than an hour in duration. For those who participate in events lasting under the 60-minute mark, time-limited mass carb ingestion does less good than frequent, sufficient carbohydrate intake. This traditional concept of “carb loading” is also less necessary for athletes who take one or more days of rest between high-intensity workouts or competition. Regardless if you compete in longer endurance, ultra-endurance, or shorter endurance activities, the timing, as much as the amount, of carbohydrate consumption matters.

This has been a matter of some controversy in recent years: do endurance athletes need to eat a carb + protein snack within 30 minutes of completing a hard workout or race?

It has long been understood that muscle cells are better able to take in glucose and store it as glycogen immediately after vigorous physical activity because of an increased level of insulin in the bloodstream during that time. Insulin acts like a key–unlocking cells to allow glucose to head on in. And when more insulin is present, more glucose can get into cells.

This review published in April, 2019 does an excellent job of describing how and when endurance athletes should replenish their carbohydrate stores and in which situations it matters the most. For athletes who are competing/performing in repetitive events over a series of hours or days, focused carbohydrate replenishment starting within 30 minutes of completing the activity matters most: soccer players or wrestlers who will participate in several matches over a couple days; long-distance track athletes who will compete in numerous events over a 2-3 day period; dancers who perform in shows on back-to-back nights. In these cases, the recommendation is to replenish the body’s glycogen stores at a rate of about ½ gram of carbs per pound of body weight per hour.  The body will most efficiently turn this ingested carbohydrate into stored glycogen within the first 3 hours (again, due to insulin levels that are optimal for helping move the glucose into cells).

And let’s not forget about pairing that carbohydrate intake with protein. The Academy of Nutrition and Dietetics recommends endurance athletes should aim to get in 1.2-2.0 grams of protein per kilogram per day, which includes 15-25 grams of protein as a part of their post-workout snack within a two hour time window.

Here’s an example of how to calculate that protein requirement in a theoretical 130 pound athlete:

So even if your belly is protesting at the idea of taking in a little nutrition after your class/practice/workout, get yourself to DO IT. You will benefit from it in the long run (pun intended)!